Earth fails to meet the requirements to join the galactic community and even ignores its existence so far but the humans can be found in great numbers in space.
After the Obsidian Wars, the Vötts who were the main armed force of the galactic community became increasingly powerful and demanding. To counter their ascension and because the volunteers from other species were lacking, it was decided to search for a race with the same natural abilities and taste for war the Vötts had.
The first human specimens were abducted during decades, cloned and sometimes enhanced. Far from being a slave race, the humans were given several worlds to colonize and granted the same rights in the federation as worlds or citizens.
However there are people in the federation who think that the humans are raising too many political problems like the reunion with Earth and that the integration of this planet would have been preferable to the creation of several "Earths" within the galactic community... 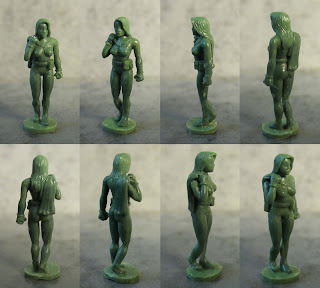 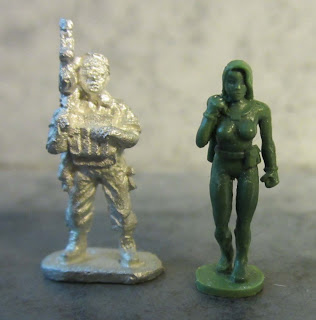 17,5 mm top of hair. needs a couple of touch-ups. Thanks to Rebel Minis for allowing me to use one of their miniatures for the comparison picture.
Publié par PF à 00:19