The secrets of a blog and a power armor

When I decided to start this blog, I wanted to show one miniature each day. I thought about "everydayamini" ,"today's 1:100" and things like that. Then I realized that not only those blog names sucked but that I might not have access to the internet everyday. Also,other sculptors were probably making much more than one 1:100 miniature each day. :D Depending on the figures I make,I sometimes do more than once too tho...


So in order to be sure I'll be able to post on a daily basis (or at least on average),I thought about showing sculpts I made in the past. I will do that every sunday because it's the day for the lazyness.

I am not too fond of tutorials or tons of explanations about sculpting since I am not really into the technical aspects of it but more of an impulsive putty pusher. However today I thought it might be interesting or amusing for some of you to see the different steps of the making of a power armor I made for Jon from Khurasan Miniatures two years ago.

The idea was to make a group and Jon had some cool precise ideas about it. Nowadays, I still consider myself a beginner with only a few years of experience but at the time I had only made a few random 1:100 sculpts so I was really worried to fail him. Commission work + uniforms = tons of anxiety! Jon told me he was confident but also that I would make one miniature with room for interpretation and then he would cast it before I make the other guys of the team. Plus we were talking about a power armor so it sounded like tons of fun.


Here is the first version of the thing: 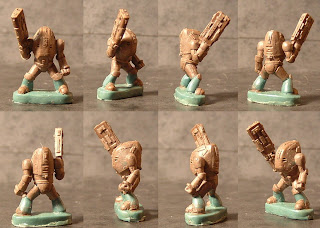 It was not what Jon wanted. I could easily understand as I gave a lot of importance to the word "interpretation". Not to mention that despite it was not my intention, it looked a bit too much like some "xenos" guys from the leader of the 1:56 (or is it 1:48 today?) miniatures market...Jon allowed me to sell this one to someone else so I was happy to start again. 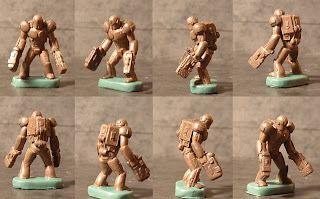 This one was closer to the ideas Jon had described but it needed some changes. Since I have issues touching-up brown stuff , I thought best to remake the miniature and again Jon was kind enough to let me sell this one to another company. 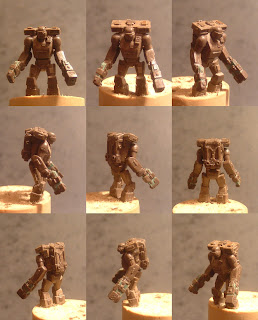 Jon liked this one but not that much the head. 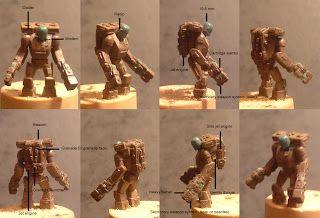 He wanted the helmet to be less round.Also he wanted the miniature to be more in movement. I told him I had done that so it could be easier to make modifications for the squad. That miniature was more like a template in my mind. He told me he was okay...except I had already modified the miniature when he answered me. As I told you, I am quite impulsive.Also I wanted him to be really happy. I think at one point,one of us thought the gun of the first try was better for this miniature. Jon wanted the weapons to be separate so you could choose the flamethrower or the shotgun or stick them to the backpack. 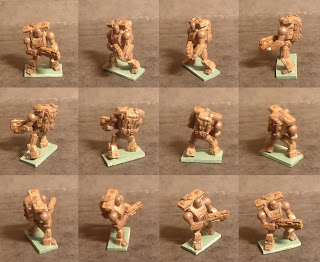 Now, all was needed was waiting for some casts and making the other members of the team.

It was a blast to work with Jon on that project. I hope you like the results.

One last thing: in case you think it's a pain to read me, english isn't my native language so please accept my apologies.
Publié par PF à 10:25